A Chinese salesman in his mid-fifties was introduced to Da Ma Cai mobile app dmcGO in January this year. After understanding the benefits and convenience of dmcGO, he immediately registered as a member, so that he can bet on all Da Ma Cai’s game anytime anywhere. Never did he expect that he would have won the jackpot of RM1.13mil through the mobile app.

The winner revealed that he is a travelling salesman and often has to go through the trouble of looking for an outlet to place his bets, which sometimes resulted in him missing the betting hour.

He said he can easily place bets through dmcGO. More importantly it allows him to be in control of all the games he can play.

The winner mentioned that he usually plays 5 sets of 3D Jackpot numbers using the dmcGO app. However on that day, he decided to try out the Lucky Pick feature and bought another set of 3D Jackpot numbers. Unbelievably, the auto-generated lucky pick numbers with a combination of “215 + 290 + 301” is the one that landed him the jackpot.

Lucky Pick is a feature available in dmcGO app that is popular amongst Jackpot players. In addition, customers can also look at the numbers dictionary, where they can find ideas or inspirational “Tua Pek Kong” or zodiac numbers to buy.

On his new found fortune, the winner said without hesitating that he will settle his housing loan and fulfil his dream of being his own boss.

dmcGO is the revolutionary mobile betting channel offered exclusively by Da Ma Cai to its members. It is an alternative betting channel that elevates the gaming experience for numbers players. The app provides ease and comfort to customers; whereby they can now play Da Ma Cai games without the hassle of locating an outlet, lining up or worries of missing any games. 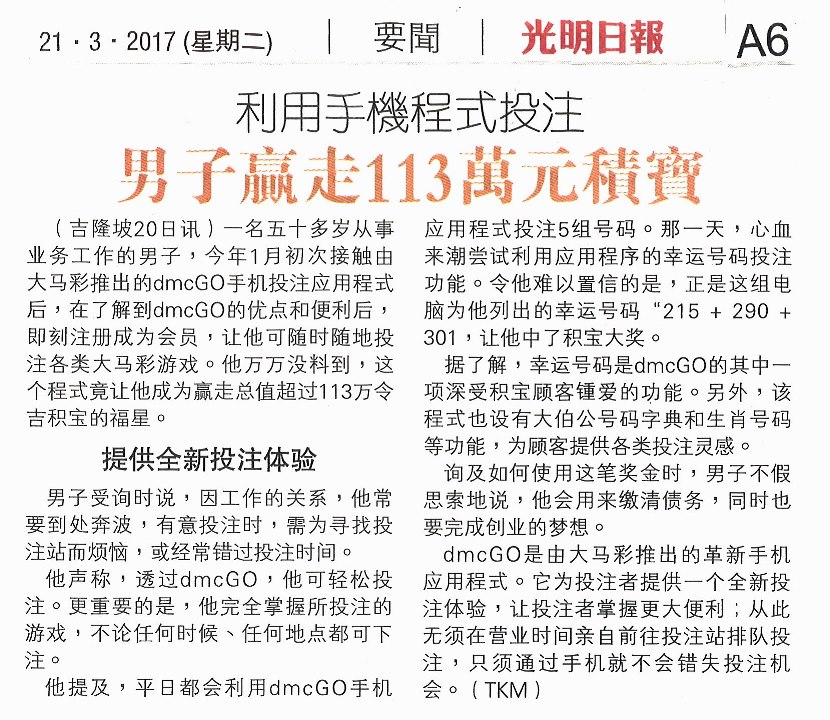