Da Ma Cai donated RM800k to charity with the theme ‘A Time for Tradition and Sharing’. Distribution was made to 80 charitable organisations nationwide with each organisation receiving RM10k in conjunction with Chinese New Year.

22 charitable organisations from Negeri Sembilan, Melaka and Johor benefitted from this Programme. The beneficiaries were invited to a luncheon held at Persatuan Buddhist Malaysia Cawangan Jasin (PBMCJ), Jasin, Melaka, and received RM10k each.

Andrew Ho mentioned that this Programme initiated since 1994, has surpassed RM16.8 million of the cumulative contribution.

“The donation aims to assist the community centres for its development and maintenance upkeep, ultimately benefiting the residents of these centres.”

He stated that, on an annual basis, Da Ma Cai actively supports various causes in the areas of education, social welfare and public health through a wide range of programmes and activities carried out in the country. Da Ma Cai believes that success is not just about what and how well the business does, but also how Da Ma Cai could go about helping the society.

Ho stated, following the acquisition of PMP by Jana Pendidikan Malaysia Sdn Bhd (“JPM”), all of PMP’s net dividends that JPM receives will be donated to The Community Chest. With this structure, Da Ma Cai has effectively been transformed from a for-profit organisation into a social business.

Lim Keng: Interaction opportunity for the committee members with other organisations

Chairman of PBMCJ, Lim Keng said it is a happy occasion to be able to meet so many peers from other charitable organisations, and work together towards charitable causes.

Other than the outstanding lion dance performance, the organiser has arranged the tossing of “Yee Sang” and Chinese-western cultural songs performance for the guests. Angpows were also distributed to the senior citizens who attended the Programme. 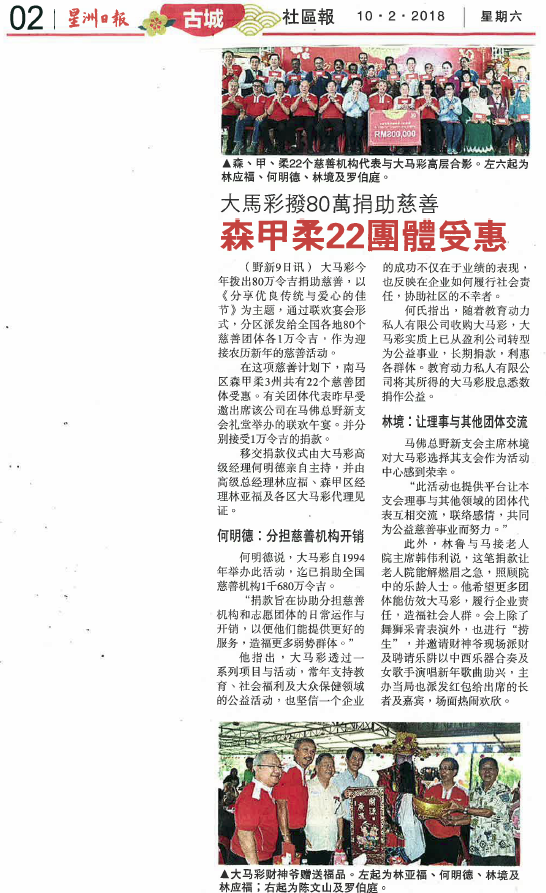