The Da Ma Cai 1+3D Jackpot is expected to cross the RM30 million mark again in this coming weekend.

Da Ma Cai spokesperson said, “This is the second time in a month that the jackpot reaches to such massive amount. Customers from all over the country are thrilled over the rising amount.”

“This weekend could prompt yet another round of cascading.  Customers who missed out previously should not let this golden opportunity slip pass them.”

Earlier on 4 August, the jackpot prize had surged to over RM31 million but since the Jackpot 1 prize money went beyond RM30 million without any winner, the jackpot cascading feature came into effect. Under that circumstances, the amount in excess of RM20 million from Jackpot 1 has cascaded and added to the 1+3D Jackpot 2 prize, instantly elevated the Jackpot 2 prize money to more than RM12.4 million.

“I thought I had won a few hundred thousand. I did not expect such a huge jackpot amount. The euphoric feelings and the sensation of winning are overwhelming, it took me 2 days to calm down to reality that I really won a windfall of RM5.8 mil jackpot,” said one overjoyed lucky winner.

Da Ma Cai had recently introduced additional House Share System Bet (HSSB) options ranging from HSSB 4 to HSSB 150 that allows customers to buy a share of the System Bet. These affordable options allow them to play more numbers to increase their winning chances but at fraction of the price. 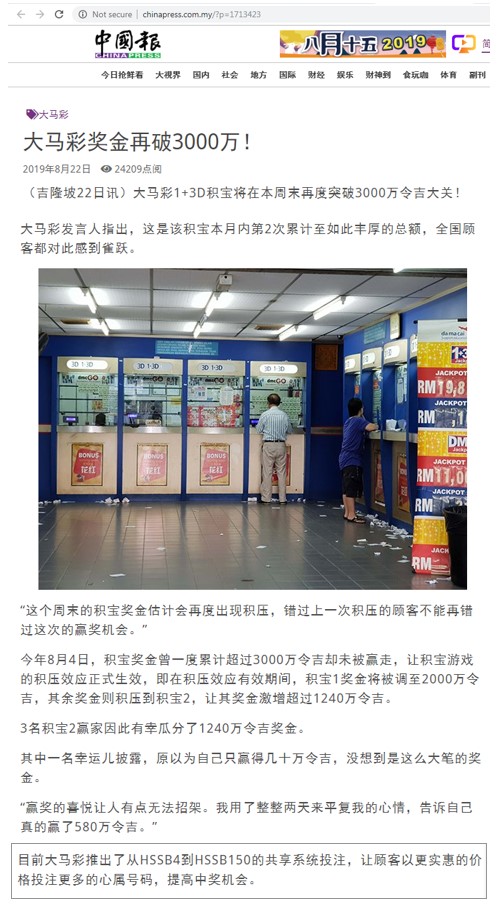